Food guides are an informative tool that orients our diet.

Since 1916, the United States Department of Agriculture (USDA) has published several food guides. The most popular one has been the Food Guide Pyramid, published in 1992.

Macrobiotics does also count on a food pyramid. We can find the last version of the Macrobiotic Pyramid in the book The Macrobiotic Path To Total Health, written by Michio Kushi and Alex Jack.

This is the Macrobiotic Pyramid: 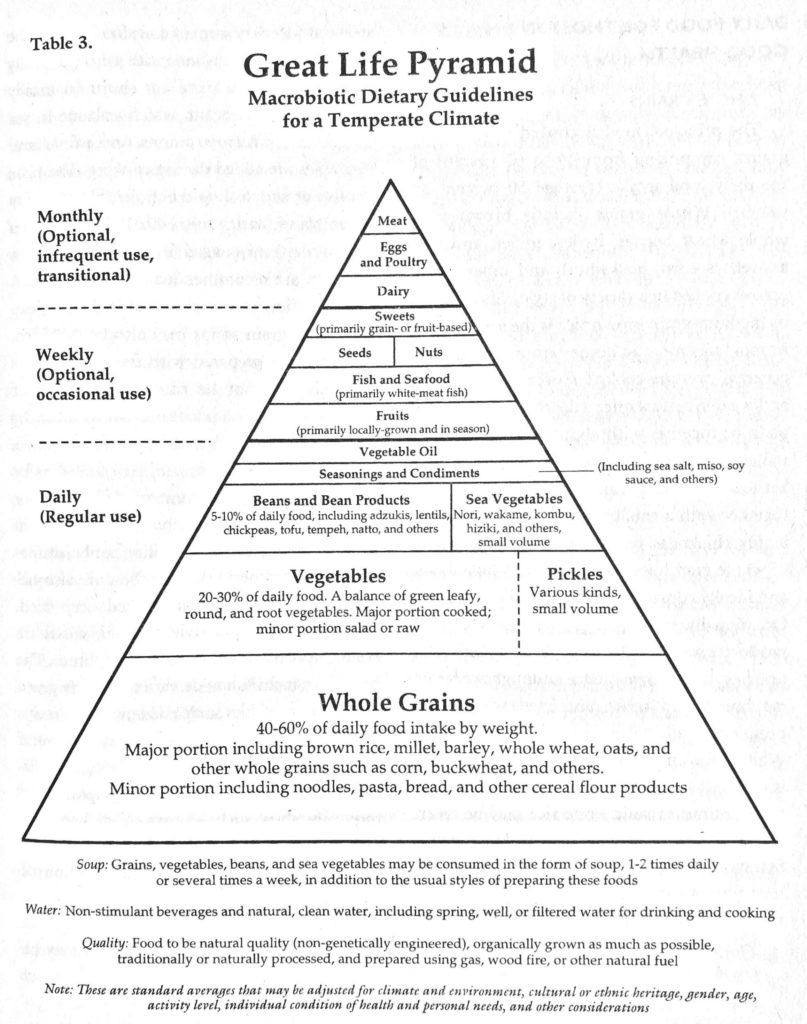 Michio and Alex wrote the following words together with the previous picture:

The Great Life Pyramid is designed as a graphic depiction of the relative importance and proportions of the different food groups. It shares the same basic orientation as the U.S. Food Guide Pyramid, the Mediterranean Diet Pyramid, the Asian Diet Pyramid, and the Vegetarian Diet Pyramid but is more comprehensive. The Great Life or Macrobiotic Food Pyramid is based on a universal eating pattern found throughout the temperate regions of the world, not just one civilization or culture, and is more in line with current nutritional and medical studies than the other guidelines. Please study this illustration carefully.

The Pyramid is a more detailed version of the pie chart we saw in the post Foods of the Macrobiotic Diet. Personally, I believe this is a good way of summarising what the Macrobiotic Diet is, and a proper starting point when designing a personalised diet.

[1] To know more about the Food Guides visit: https://www.choosemyplate.gov/brief-history-usda-food-guides

[2] The image of the Macrobiotic Pyramid comes from the book: Kushi, M. and Jack, A. (2003). The Macrobiotic Path To Total Health. New York: Ballantine Books.