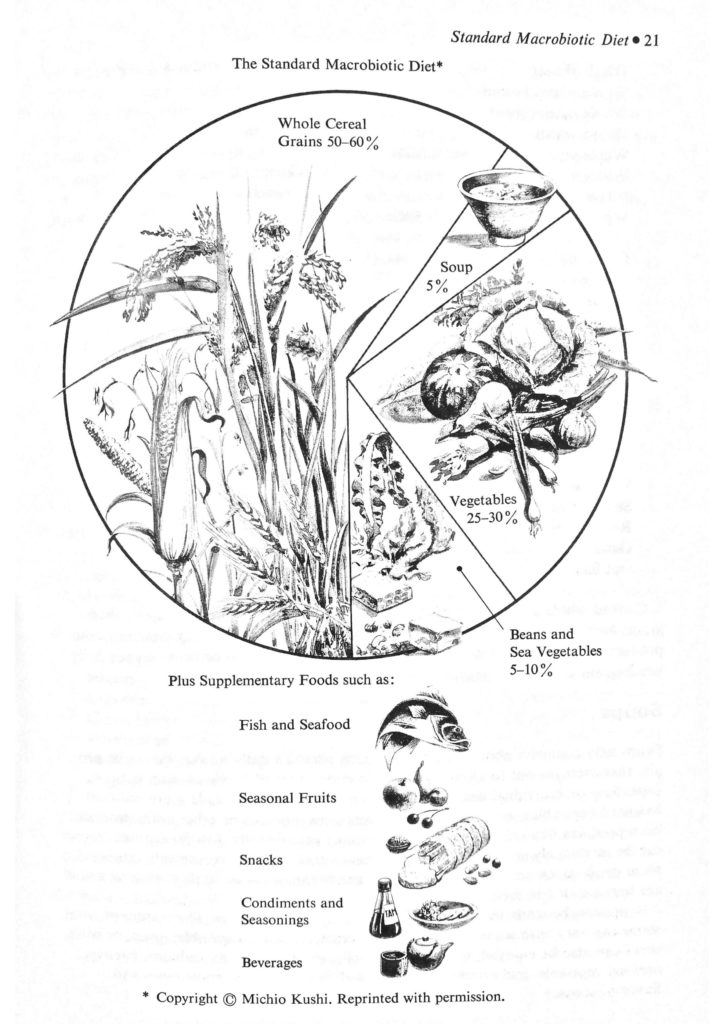 Imagine that you want to eat healthy.

Where would you start from?

If you want to eat healthy, you should know two things:

(1) What the standard macrobiotic diet consists of.
(2) Learning how to adapt yourself to it. A macrobiotic counselor will do it for you.

We will focus on the first bullet point today:

In order to show you what the standard macrobiotic diet is, I am going to use fragments from a book written by Michio and Aveline Kushi in 1986: Macrobiotic Child Care & Family Health. Once you read it, you know much more about macrobiotics.

It says the following:

In general, an optimally balanced diet in a temperate, or four-season, climate consists of the following proportions of food:

1. Whole Cereal Grains
We recommend that cooked whole grain cereals comprise at least half (50 percent) of every meal. Cooked whole grains are preferable to flour products as they are easier to digest. Whole grains for daily use include: Brown rice (short grain is preferable in temperate climates), millet, barley, corn, whole oats, wheat berries, and rye. Whole grains for occasional use include: sweet brown rice, mochi (pounded sweet brown rice), whole wheat noodles (including udon and somen), buckwheat, buckwheat noodles (soba) unleavened whole wheat or rye bread, or unleavened bread made from other whole grains, rice cakes, cracked wheat, bulgur, steel cut and rolled oats, corn grits and meal, rye flakes, and couscous. In general, it is better to keep the intake of flour products, flaked cereals, and products such as couscous and grits below 20 percent of the daily proportion of whole grains.

2. Soups
One or two cups or small bowls of soup may be included daily. We recommend seasoning soups with a moderate amount of miso, tamari soy sauce, or sea salt, so that they taste neither too salty nor too bland. Soups may be prepared with a variety of ingredients including seasonal vegetables, sea vegetables -especially wakame and kombu- and grains and beans. Barley miso, also known as mugi miso, is generally better for regular use, while soybean (Hatcho) and brown rice (genmai) miso may be used on occasion.

3. Vegetables
About one-quarter (25-30 percent) of each meal may include vegetables prepared in a variety of ways, including steaming, boiling, pressure-cooking, and others. In general, up to one-third of your daily vegetable intake may be eaten in the form of macrobiotically prepared pickles or salad. We recommend avoiding commercial dressings and mayonnaise.

5. Supplementary foods
Depending upon age, condition and type of activity, a small amount of whitemeat fish or seafood may be eaten once or twice a week. Suitable varieties include: flounder, halibut, sole, carp, haddock, trout, clams, oysters, smelt, scallops, shrimp, chirimen, iriko (tiny dried fish), and chuba (small dried fish).
A small volume of roasted seeds, lightly seasoned with sea salt or tamari, may be enjoyed as snacks by adults and older children. Suitable varieties include: Sesame, sunflower, pumpkin, and squash seeds.
Desserts may be enjoyed now and then, generally about two to three times per week. Unsweetened, cooked fruit desserts are preferable. However, small amounts of high quality natural grain sweeteners such as rice syrup, barley malt or amasaké (slightly fermented sweet brown rice) may be added occasionally. Dried and fresh local fruits in season may also be enjoyed from time to time by those in good health.

8. Oil and Seasoning
It is best to use only a moderate amount of high quality, cold pressed vegetable oil in cooking. It is generally advisable to limit the intake of sautéed vegetables and other dishes which contain oil several times per week, and to use only a small amount of oil when preparing those dishes. Oil may be used occasionally in deep-frying grains, vegetables, fish, and seafood. Oils for regular use include: Sesame, dark sesame, and corn oil.
Naturally processed, unrefined sea salt is preferred over other varieties of seasoning. Miso and tamari soy sauce, both of which contain salt, may also be used. Seasoning that can be used regularly by adults and older children include: Miso, tamari soy sauce, white sea salt, umesboshi plum or paste, umeboshi vinegar, and rice or other grain vinegar.

9. Foods to reduce or avoid in temperate climates according to vintage macrobiotics:

[2] Image of the post from the book: Kushi, A. and Esko, W. (1989). Aveline Kushi´s Wonderful World of Salads. Tokyo and New York: Japan Publications, Inc.